In film, Joe vaulted from farce in Good Grief Suicide Hotline to lethal menace in Those Who Deserve to Die (2019). He touched hearts as the ill-fated Kenneth in the series Dead Silent (2020),  famously sacrificed vital body parts in the cult horror favorite V/H/S (Amateur Night) and once seduced a much-loved character in the popular BET series Being Mary Jane. He’s had the good fortune to work with rising film directors David Bruckner, Regina King, and Bret Wood.

On stage, Joe emerged from the pandemic in Sawyer Estes’ physically and emotionally demanding adaptation of Luis Buñuel’s iconic 1960s film The Exterminating Angel. He has earned critical acclaim for his work in edgy, unsettling dramas like Wolves and Bengal Tiger at the Baghdad Zoo and for his heartbreaking work in Angels in America and The Hero’s Wife.  Ever versatile and always able to find new routes to the human heart, Joe played Eeore in the family musical Winnie-the-Pooh, inspiring both cheers and tears. He’s collaborated often with playwright and screenwriter Steve Yockey to originate lead characters in ground-breaking productions.

There’s a humanity about Joe that can’t be faked. He’s comfortable with the unsettling ambiguities of life. When audiences see parts of themselves in the bigot Karl in Clybourne Park or look to Death for comfort in Steve Yockey’s disturbing play Pluto, that’s Joe. That’s Joe making it ok for us to look into the raw, damaged places. Maybe it’s even funny. Joe can do that.  Of course, if he’s playing a psychopath, it’s unnerving. Read Joe’s bio.

“As a performer, Joe is fierce, vulnerable, sexy and magnetic. As an actor, he is a dream.  He is wildly funny and incredibly warm. He has a healthy ego and a power to disarm tension in the room…. And a hard worker! He digs and digs and digs until he mines each moment.  Then he digs a little more.” — Rachel May, producing artistic director, Synchronicity Theatre   Read more from directors who have worked with Joe…

Vernal & Sere Theatre marked its return to live productions with Sawyer Estes’ adaptation of Luis Buñuel’s 1960s film The Exterminating Angel — a definitive thumb-in-the-nose to the stark reality we have all been living these past two years. Directed by Sawyer Estes and Erin O’Connor, the production is an elaborate, ensemble-based piece filled with the company’s characteristic use of movement, poetry and media.

In this world-premiere stage adaptation of Buñuel’s iconic surrealist film, a group of dinner guests find themselves incapable of leaving the party, turning a festive few hours into harrowing days, weeks, and months. Imprisoned together, the guests discover the foundational traditions and mores of human civilization begin to give way to a different form of order.

Joe plays Edmund. “I’m host of the party,” he says, “the party where none of the guests leave. I try to take care of their needs all the while confused, frustrated, and eventually enraged by the fact that my guests will not exit the dining room. It is a surreal experience. But isn’t the world we live in now also?” 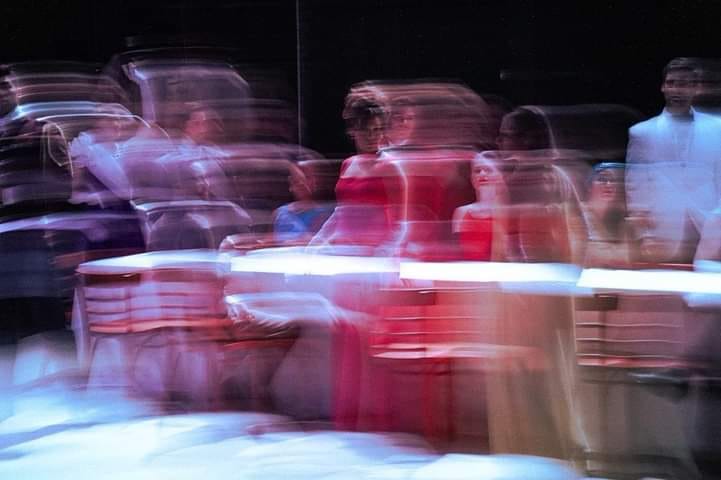 Want to see clips of Joe’s work in film and television? 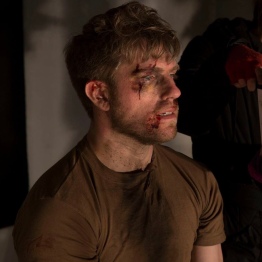 Cat on a Hot Tin Roof

More than 60 years after its debut, ‘Cat’ may be Tennessee Williams’ most contemporary play. In a candid Q&A, Joe Sykes, who played Brick in the highly successful GET production, talks about Brick’s tangled sexuality, Tennessee Williams, and the delights of dysfunctional families. Read the interview.

“…the ideal casting of two of Atlanta’s brightest actors in the pivotal roles of Maggie and Brick: Kate Donadio MacQueen and Joe Sykes. And what a difference their terrific performances make in the grand scheme of such well-worn material….  Whenever MacQueen and Sykes are on stage, this ‘Cat’ sizzles. They work off one another exceedingly well, with a sexual tension that’s palpable and a genuine chemistry….  Thankfully for the Georgia Ensemble show, great acting is great acting, and Sykes and MacQueen pull it off with a transcending conviction. — Bert Osborne, Atlanta Journal Constitution

“Sykes as Brick does a superior job of making the hopelessly alcoholic Brick a sympathetic character, one who is tortured by the betrayal of both his best friend (for dying – one may presume suicide) and his wife for sleeping with him….” — Hatcher Hurd, Forsyth Herald.

Cat on a Hot Tin Roof at GET. Photo by Dan Carmody

The Hero’s Wife by Aline Lathrop is an intimate portrayal of the disturbing and heartbreaking effects of PTSD, told from a wife’s point of view. Directed by Rachel May and presented by Synchronicity Theatre, Atlanta, in a Joint World Premiere with 16th Street Theater, Chicago. Starring Rebeca Robles and Joe Sykes, who plays Cameron, a Navy SEAL newly returned from combat. Photos by Jerry Siegal. Video clip by Amanda Sachtleban.

“Two professional actors at the top of their form…. Mr. Sykes turns in a powerful, moving performance. When he admits, ‘I don’t know how to be in the world,’ and especially when he almost breaks down as he realizes what he has done to his wife, it’s a visceral, heartbreaking moment.” — Manning Harris, Atlanta INTOWN

“Sykes’ powerful physical presence is softened by Cameron’s desire to leave behind the roughness from his military career…. This play leaves no room for awkward or disingenuous connections; Robles and Sykes deliver authenticity.” — Susan Angeline, ATSATL 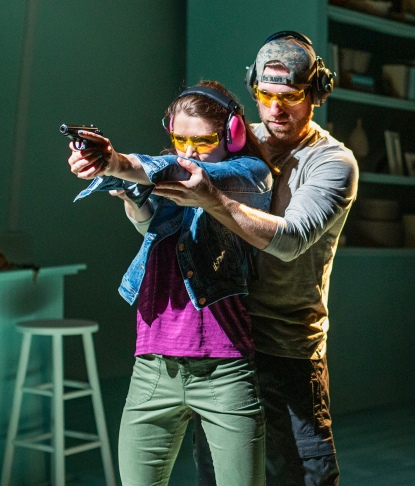 Rebeca Robles and Joe Sykes in The Hero’s Wife, photos by Jerry Siegel 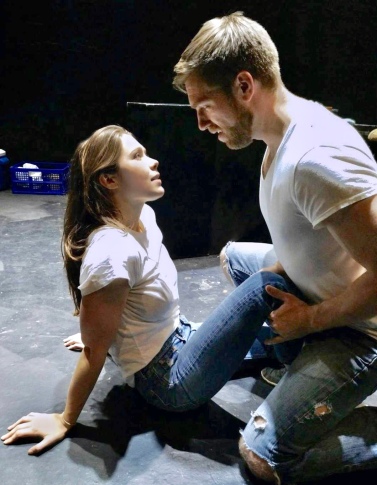 “The Hero’s Wife shows the resilience and heartbreak of two young adults attempting to be their bravest selves for each other”— Susan Angeline, ATSATL Read more from critics…

A sweet moment from The Hero’s Wife…

Joe talks about the play, the impact it’s had on his life, and joint work Synchronicity is doing with United Military Care to open up more conversations about life after deployment for veterans and their families. This production required a fight choreographer and an intimacy choreographer. Why? Can a play about PTSD be funny too? Read the interview.

Those Who Deserve to Die, directed by Bret Wood, is a thriller that subverts the formula of the revenge film. Unhinged and unconventional, it turns on a series of vicious murders—precise, ghastly. Yet the killer is reluctant. The ghost of a vengeful 10-year-old girl guides the killer, and she will not be denied. This violent and nihilistic thriller is not for the faint hearted.

Joe Sykes as Jonathan in Bret Wood’s Those Who Deserve To Die (2019).  Filming wasn’t easy. Read what Joe and director Bret Wood have to say about risk taking on set. 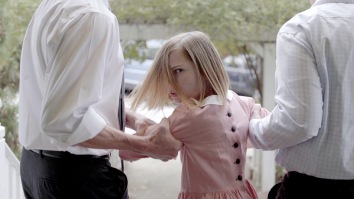 Joe Sykes joined the cast of a new cutting-edge ensemble play by Steve Yockey—Reykjavik at Actor’s Express. Audiences were shocked, disoriented, and tearful.

What’s happening here? Ensemble theater has changed—offbeat scripts, fractured story lines, ambiguous characters whose lives spill over from one story into another. Plays like Reykjavik explore what it means to be human with new structures and a whole new vocabulary. The result? Big choices and big risks for actors. Read more…

“One of Joe’s greatest strengths is his versatility. He attacks with equal skill very masculine alpha characters along with more sensitive and vulnerable characters. His range never ceases to surprise me.” — Freddie Ashley, artistic director, Actor’s Express.

“A resourceful ensemble of eight actors, each playing several roles, excels….  (Joe Sykes is) … outstanding. Besides truly registering as the tortured Joe, Sykes offers fleeting kicks, too, as the incarnation of a prior Prior Walter, and even a mechanical diorama mannequin.” — Bert Osborne, Atlanta Journal Constitution

What the Critics say… 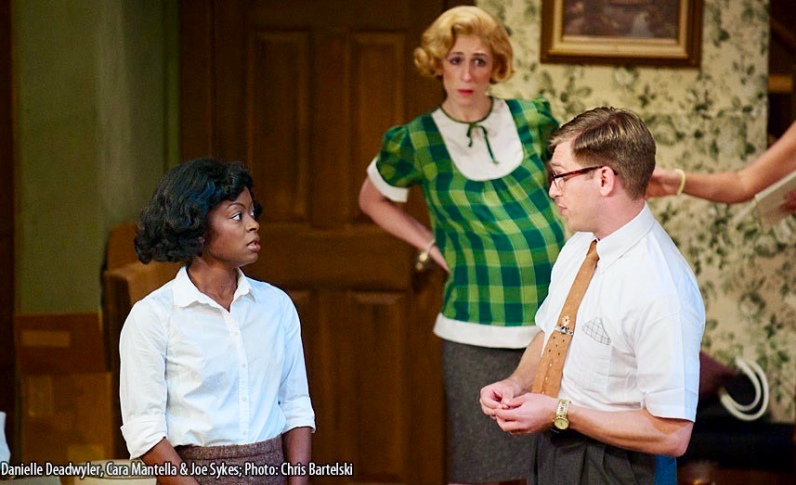 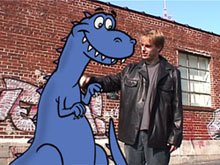 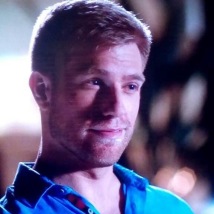