Rough cut footage from the Bret Wood film Those Who Deserve to Die (2019). Here, Joe Sykes is Jonathan, a troubled loner caught in a spiral of revenge driven by the ghost of little sister, Berenice, played by Alice Lewis. Courtesy of Bret Wood.

Virginia Prescott, host of “On Second Thought” for Georgia Pacific Broadcasting, interviews director Rachel May and actors Rebecca Robles and Joe Sykes about their work on A Hero’s Wife by Aline Lathrop at Synchronicity Theatre. The play explores the distressing and heartbreaking effects of war and PTSD on a young wife and her ex-Navy SEAL husband. (The full May 2, 2019 interview is available at “On Second Thought” at GPB.) Photos below by Jerry Siegel. 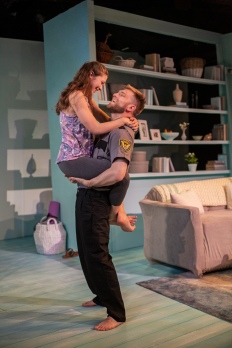 Rebeca Robles and Joe Sykes in The Hero’s Wife. Photo by Jerry Siegal

Rebeca Robles and Joe Sykes in The Hero’s Wife, photos by Jerry Siegel

During the run of Reykjavik at Actor’s Express, Joe Sykes and director Melissa Foulger took time out to talk with Lois Reitzes, host of City Lights at WABE radio in Atlanta. Here’s an excerpt from that interview. Joe talks about the vingnette  ‘Twelve Ravens’ from Reykjavik, dark themes, and the humor of playwright Steve Yockey. (Listen to the full interview at WABE.org)